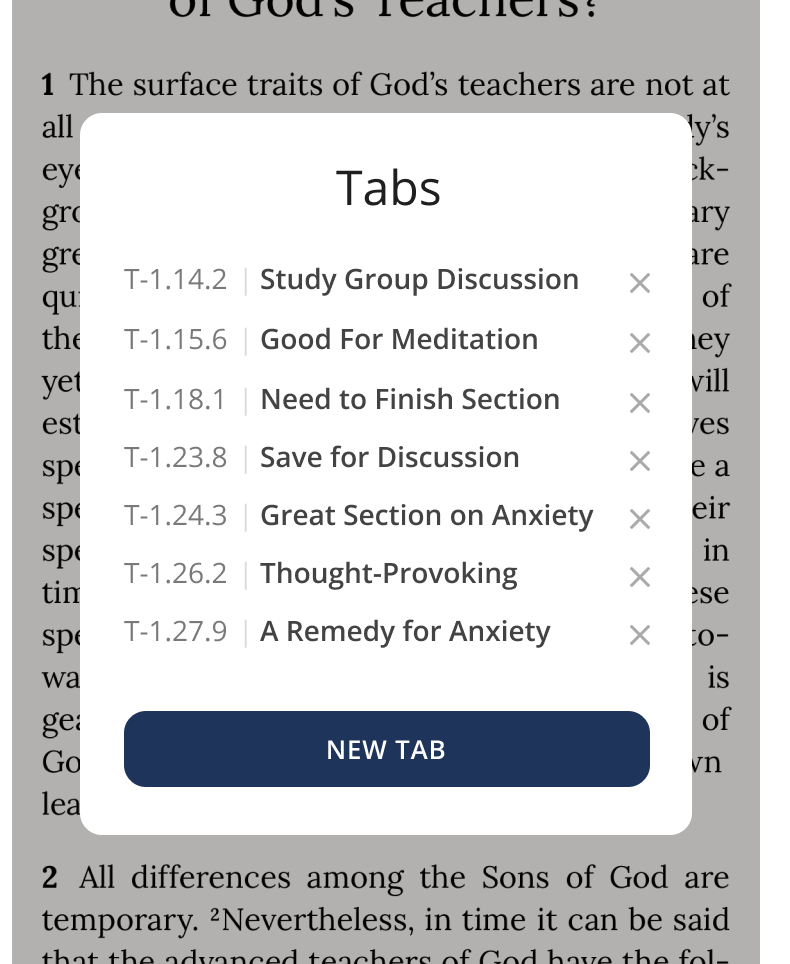 At the time of last month’s ACIM CE App update I was in the midst of proofing the ‘Workbook’ audio files which had been recorded last year. I’m delighted to say that the process has been completed and, a few weeks ago, Robert and Emily were able to take the notes to the studio to re-record the (few) errors and sound quality issues I found. This means we will be able to include audio recordings of the entire Workbook in a future version of the app, so you will be able to listen to all Lessons from within the app, as well as reading them yourself.

Our developer, Peter, has just returned from a well-earned break in Spain, and is liaising with sound engineer Joe to integrate the new audio files into the app and working on the advanced search options. Meanwhile, Will has been fine-tuning some of the design elements you’ll see in the first version of the app, such as the highlighting and navigation tools.

We are particularly looking forward to share our new ‘tabs’ functionality with you. This is an advanced ‘multiple moving bookmarks’ tool which Peter has designed in response to the way many of us work with our physical copies of the book. I don’t know about you, but I have a bookmark for my daily Text study, another for my Text Study Group, and one for Wednesday’s Text classes. I also have various others for things I want to come back to later. These bookmarks are not permanent - they move with me as I progress through the Text.  The ‘tabs’ functionality will make it really easy for me to do that within the app, and I’m sure you’ll find various ways to use it too.

By now, you’re probably getting a sense that this is a project with a lot of moving parts and involving many people. In addition to the design, development, and audio recording already mentioned, there are other things going on behind the scenes too. For example, Sandra - one of our most experienced volunteers - is double-checking and re-formatting the Workbook practice reminders Robert produced for the app. Mary Anne is working on something (exciting) for a later version. As well as being project manager, I’m now working on the audio files for the Text which will also be included at a later date. This really is a team effort and it’s such a pleasure to be a part of it.

Of course, none of it would be possible without you - this project is largely funded by your donations. We appreciate every single one - whether it’s just a few dollars here and there, or a larger one-off contribution. If you would like to see the list of contributors, or to make a (further) donation yourself, please visit our Donations page.

Copyright 2023 Circle of Atonement
We use cookies on our website to give you the most relevant experience by remembering your preferences and repeat visits. By clicking “Accept”, you consent to the use of ALL the cookies.
SettingsAccept
Manage consent

This website uses cookies to improve your experience while you navigate through the website. Out of these, the cookies that are categorized as necessary are stored on your browser as they are essential for the working of basic functionalities of the website. We also use third-party cookies that help us analyze and understand how you use this website. These cookies will be stored in your browser only with your consent. You also have the option to opt-out of these cookies. But opting out of some of these cookies may affect your browsing experience.
Necessary Always Enabled
Necessary cookies are absolutely essential for the website to function properly. These cookies ensure basic functionalities and security features of the website, anonymously.
Functional
Functional cookies help to perform certain functionalities like sharing the content of the website on social media platforms, collect feedbacks, and other third-party features.
Performance
Performance cookies are used to understand and analyze the key performance indexes of the website which helps in delivering a better user experience for the visitors.
Analytics
Analytical cookies are used to understand how visitors interact with the website. These cookies help provide information on metrics the number of visitors, bounce rate, traffic source, etc.
Advertisement
Advertisement cookies are used to provide visitors with relevant ads and marketing campaigns. These cookies track visitors across websites and collect information to provide customized ads.
Others
Other uncategorized cookies are those that are being analyzed and have not been classified into a category as yet.
SAVE & ACCEPT